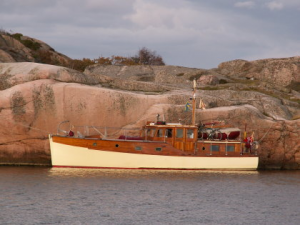 Ruda (Lloyd’s official number 166177) was built in 1938 at the Shoreham yard of H T Stow as the first boat of their newly designed ‘Adur’ Class of cruiser. She was exhibited at the London Boat Show and was offered for sale at £2,800 (a boat built to the same design but fitted with petrol engines could be ordered for £2,300).

Ruda is carvel built with pitch pine planking on oak frames, and with teak deck and superstructure. She is fitted with twin Ailsa Craig RF2 16-24hp 4-stroke diesels which are still powering her along at a cruising speed of around 6 – 7 knots. Her hull and deck, as well as her teak and Honduras mahogany interior are almost entirely original.

Ruda entered service with the Royal Navy during the second world war (although there is no evidence that she participated in the Dunkirk evacuation), and was bought back by the yard when hostilities ceased. She then had a series of private owners and for some time during the 1960’s worked as a hire boat for Blue Water Cruisers in Salcombe, Devon.

Ruda was purchased by the present owner in 1995 and was restored in south Devon. Since 2004 she has been cruising in Europe – you can see where she’s been on the ‘Ruda’s journey’ page.