In May 1938 Ruda was reviewed by The Motor Boat magazine. The text of the article is reproduced here:

In The Motor Boat for September 17 we announced that the recently organised yard of Lady Bee, Ltd., Shoreham, was to produce a series of standard craft, and published the plans of a 39-footer, which was then under construction.  This boat has now been completed, a similar model is being built, and three 26-ft cruisers and two 6-ton sloops have been laid down.  It is hoped to have models of the three types at the next Motor Boat Show, and have a 26-footer available for demonstration on the Thames.

We were recently afforded the opportunity for inspecting the 39-ft craft and making a short run in her along the Sussex coast. The boat is known as the Adur cruiser, and is owned by Mr. C. M. Haworth, director of Lady Bee, Ltd. She is what may be described as a husky vessel, an ample margin of strength being aimed at in every detail of her specification.

The boat has a beam of 10 ft and a draught of 3 ft. 6ins. She is planked in 1 1/4 inch pitch pine with teak topsides and laid teak decks. Wrought-iron frames are employed. There is a 16-cwt iron keel and about 10 cwt of inside ballast is carried. All the skin fittings, including those of the two toilets, are fitted with seacocks; the electric wiring is of 5-amp. capacity and is bonded and earthed; the switchboard and switches are iron clad.

In the conventional position under the wheelhouse is a pair of two-cylinder Ailsa Craig engines, rated at 16-24 h.p. Electric starters are fitted, and the port motor is coupled to a mechanical bilge pump. No revolution counters are provided. The engine-room is adequately ventilated with two inlet and two outlet vents. Parsons silencers are installed. M.R.C. controls are used to operate the engines from the wheelhouse. 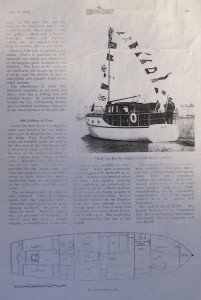 Some originality has been shown in planning the accommodation, which is carried out in mahogany. In the crew’s quarters forward there are two fixed bunks, one over the other, on the port side, and the toilet on the starboard side is concealed by a lid, which forms a seat. The galley is fitted with a Taylor’s Calor-gas cooker, and crockery, cutlery, etc. are supplied with the boat in suitable shelves and lockers.

There is 6-ft 1-in headroom in the saloon, which is panelled in well-seasoned lace wood and illuminated by rectangular ports designed by the builders. The back of the settee on the starboard side hinges up to form a berth, and the dinette to port is convertible into a double berth in the usual manner.

The wheelhouse is fitted with Beclawat windows at the front and sides, and has a sliding roof and entrance doors. The unusual feature is that the S.L. self-holding steering gear is installed amidships, instead of the the usual position on the port side.

Under the floor there is a 60-gallon water tank between the two engines and a pair of 40-gallon fuel tanks in the wings. Two 10-gallon service tanks are installed under the seats at the after end of the wheelhouse, and a three-way cock is fitted so that the fuel can be supplied to either or both engines from either or both tanks. Dipsticks can be inserted into all four tanks. No dipstick is provided for the water tank, but when the pump-type tap in the galley ceases to draw water the operator knows that there are six gallons left for use in the after stateroom wash-basin.

The accommodation aft calls for little comment. There is a sliding hatch over the stateroom and a removable panel gives access to the steering quadrant. Beclawat windows are fitted. Blankets, pillows etc., are provided as standard. It will be seen that there is actually sleeping accommodation in the boat for eight people, including the crew.

“Ruda” (Adur spelt backwards) is ketch-rigged with about 260 sq.ft. of sail. A teak rail is fitted all round the deck. Two anchors, weighing 70lb and 60lb are carried and are handled by an S.L. oilbath windlass. A 9=-ft wych elm dinghy is slung in davits over the after cabin. Over a measured distance off the Brighton front the boat attained a mean average speed of about 9 knots with the motors developing about 16 h.p. each at 950 r.p.m. She would turn in approximately one and a half lengths.

The engines, like all Diesel motors, were naturally a little more obtrusive than corresponding petrol power plant. Their very economical running, and the absence of fire risk, should, however, be borne in mind when making comparisons. Some sound-proofing in the machinery compartment in Diesel-engined cruisers is, in our opinion, well warranted.

The craft is sold at £2,800. The second 39-footer to be completed, with Morris Navigator petrol engines and slightly different equipment, will cost £2,300.