Despite residing only a day’s motoring from the “Operation Dynamo”assembly point at Ramsgate, there is no record of Ruda having taken part in the evacuation of soldiers from beaches of Dunkirk during the dark days of May and June 1940. Perhaps the organisers at the Ministry of Shipping missed out Lady Bee Ltd. when they phoned around the south coast boatyards?

Anyway, according to wartime records Ruda was eventually requisitioned in June 1940:

But an entry in the Admiralty list of serving vessels will always have a human side. During the early days in the service of her country Leading Engine Man Horace Edwin “Jimmy” Green (b. 1911) joined Ruda and, happily for her, kept an autograph book. Clearly her crew also numbered a talented marine artist…

“The Night Patrol” by H. Gardner

N26 is immediately recognisable as Ruda despite her mast having now been moved aft, and her gun confiscated. 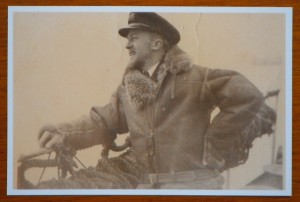 Not long after his time aboard Ruda Jimmy Green left England on the s.s.”Orbita“ bound for New York, whence onward by train to Benton Harbour where he served on a mine sweeper helping to keep Canada’s eastern seaboard open. Jimmy is pictured here in his sheepskin jacket; he talked often of the bitter cold that he experienced during his 15-months in Canada.

Jimmy also spent some of his war as a lecturer at St Luke’s in Lowestoft.  There is a sketch of him in his autograph book looking extremely dapper. 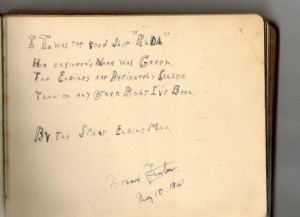 Also in the autograph book is this little ditty written by the Spare Engine Man (Howard Fenton) in which he is considerably less than complimentary about Ruda’s Ailsa Craigs.

“It was on the good ship “Ruda”, her engineer’s name was ‘Green’. The engines are definately cruder than on any other boat I’ve been”

Maybe he would be rather surprised to find that they were still going strong in the 21st century!