After more than a year spent resting in Brentford Dock Marina Ruda finally set off for a new destination; Freeman’s Wharf Boatyard in Penryn, Falmouth. Thanks so much to Brentford Dock and Brentford Cruising Club for keeping Ruda safe, and her crew entertained.

With wind and tide behind her, the first part of Ruda’s journey through London and down the Thames estuary was swift, and the conditions stayed kind as she rounded North Foreland and ran through The Downs anchorage where in November 2013 she had passed her first night back in England. After waiting out a few windy days in Dover the weather conditions improved and were perfect for an impromptu photo shoot rounding Beachy Head. 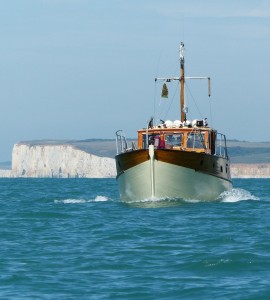 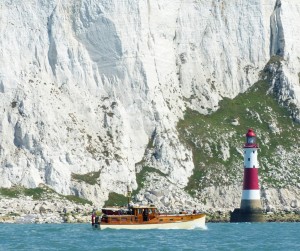 After passing the famous white cliffs Ruda stopped at Shoreham harbour and locked up into Lady Bee marina to spend a night in the place where 77 years ago the waters of the Adur river had first wetted her newly-built form. Here Ruda’s connection to the area was re-established by a visit from the family of one of her builders. You’ll find the story of Stan Page in Ruda’s First Days Afloat and we were delighted to welcome on board Stan’s widow; the nonagenarian Freda bounced aboard to inspect her husband’s handiwork from a time before they had started their 67 years together. She and her family were generous enough to reunite Ruda with some of Stan’s tools which for her crew are treasures beyond price, so a very big thank you from us to Freda, Jeanette and Derek. Here’s a picture of one of Stan’s planes on wood which may well have felt the sharp end of it. Stan’s name is engraved on the knob. 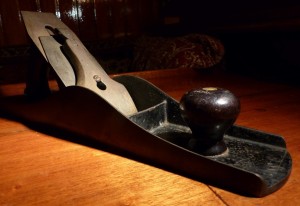 After this enjoyable brush with her own history, Ruda navigated the Jurassic Coast with the focus now on a rather more distant time. Here she enjoyed calm enough weather to trace the ten-meter contour and stay close inshore around this extraordinary coastline, and to poke her nose into Worbarrow Bay : 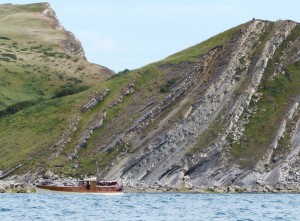 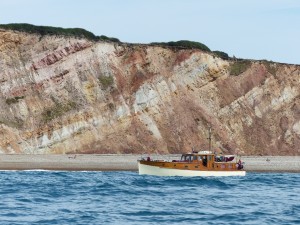 The crew spent a few days examining coastal erosion and longshore drift whilst Ruda rested in a perfect berth in Weymouth harbour before continuing westward, passing close under Portland Bill to cross Lyme Bay towards Paignton where she planned to catch up with some more of her friends.

Aboard Ruda it seemed that the sea off Portland Bill led us in an boisterous, but controlled, dance –  although an observer stationed on the rocky fringe might have thought otherwise! 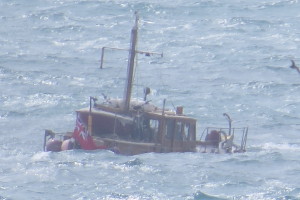 Elsewhere on this site is told the delightful story of the return of Ruda’s original bell following its time in the safe custody of Jimmy Green and his son Bruce between 1941 and 2011. Ruda spent several days in Paignton’s charming harbour where she and her crew were warmly welcomed by three generations of Jimmy’s family. 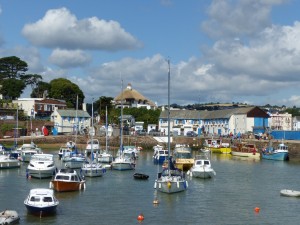 After cheery goodbyes from her friends the rest of Ruda’s summer voyage was concerned with choosing just the right combination of tide and wind to round the headlands and effect entry into the impossibly pretty Cornish ports. She poked her nose into a series of delightful harbours where fishing boats ruled, fresh seafood was on the menu and baffling Cornish accents could be heard in the narrow, cobbled streets.

Getting to our berth outside the Polperro museum was, well, interesting and no sooner had Ruda settled in than the wind shifted into the south east and the storm gate closed her in. She passed the time swapping tales with retired Looe lifeboat Ryder (1902) and lugger Maggie (1908); 297 years of history between them, while the crew profited by walking the coast. A week later the wind blew once more from its customary quarter, and it was time to move on. If getting in had been interesting, getting out was fascinating, involving ropes laid out at low tide, hauling and handing.

The calm waters of Mount’s Bay were filled with dolphins, blue fin tuna and sardines, and its beaches packed with holiday makers. And, of course, there was the magnificent St. Michael’s Mount: Ruda arrived on a Saturday which, as this is the day that the Mount itself is closed to visitors, imbued the place with a magical, peaceful quality.

Across the bay from St. Michael’s Mount is the charming village of Mousehole. Its tiny harbour doesn’t often accommodate boats of Ruda’s size but it is so impossibly cute that she felt she simply had to visit. Here she shared her beach mooring with buckets & spades, ice creams and summer happiness. 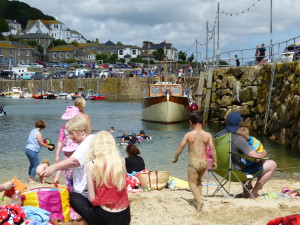 And then to the journey’s end: Penryn. After a decade of perpetual motion and happy adventures it’s now time for the old lady to catch her breath, and Freeman’s Wharf seems to be the ideal place. With colder weather approaching Ruda will soon swap her comfortable mud berth for a place on land, and we will start work to prepare her for tomorrow’s adventures… 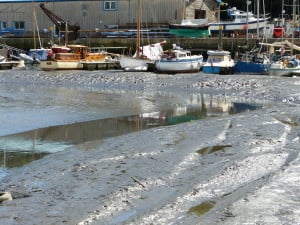