Just after the re-organisation of the Stow & Son boatyard into the new Lady Bee company, and at the very moment that Ruda was taking shape, the yard employed a youthful 15-year-old apprentice named Stanley Page. Happily for Ruda Stan’s son-in-law has very kindly shared with us some wonderful photos of her that, lacking a camera of his own, Stan “borrowed” from the yard almost 75 years ago. 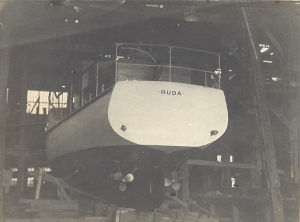 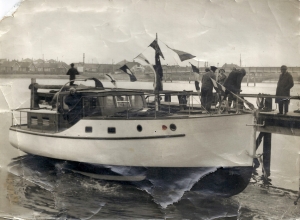 Stan’s photos show (above): Ruda on the stocks in the Lady Bee boatshed, and being launched under the watchful eyes of the owner; and (below): Alongside for final fitout & tests, and undergoing trials in Shoreham. 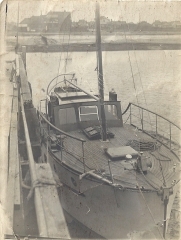 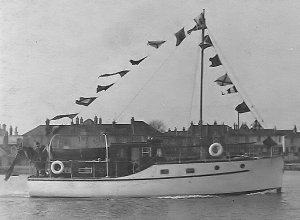 Stan has now passed away (in December 2012, aged 90) but his boatbuilding life can be explored through Stan’s boatyard photos at the history portal of the Shoreham-by-sea website, along with a good deal of information about other boats of the Stow/Lady Bee yard and the history of Shoreham during the interwar years. Ruda and her crew are much indebted to Stan and his family, and to the Shoreham-by-Sea researchers, for providing us with such valuable material.