In July 1935 The Motor Boat magazine reviewed the new Ailsa Craig two cylinder diesel engine. The text of this article is reproduced below: 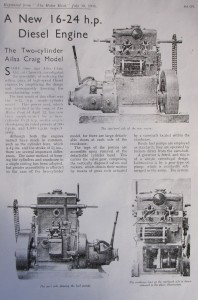 Some time ago Ailsa Craig Ltd., of Chiswick, investigated the possibility of reducing the selling price of high-speed Diesel engines by simplifying the design and consequently lowering the manufacturing costs.

The first result of this effort was the 8-12 h.p. single-cylinder model. This power unit, which was described in the issue of The Motor Boat of April 12, has now been supplemented by a twin-cylinder 16-24 h.p. marine engine developing its rated powers at 950 r.p.m. and 1,400 r.p.m respectively.

Although both the engines named have much in common, such as the cylinder bore, which is 4 1/8 ins. and the stroke of 5 1/2 ins., there are several important differences. The same method of forming the cylinders and crankcase in a single casting has been adopted, but greater accessibility is afforded in the case of the two-cylinder model, for there are large detachable doors at each side of the crankcase.

The tops of the pistons are accessible upon removal of the detachable cylinder head. This carries the valve gear, comprising the vertically disposed valves and rockers, which obtain their motion by means of push rods actuated by a camshaft located within the crankcase.

Bosch fuel pumps are employed as standard; they are operated by rockers direct from the crankshaft.

A governor is fitted, and this is of a simple centrifugal design. Lubrication is by a gear-type oil pump, which is constantly submerged in the sump. The system, which operates normally at 15 lb. per sq. in., includes not only the main bearings, big-ends and reverse gear, but also the rockers, surplus oil from which flows back to the crankcase, giving lubrication to the valve and fuel pump cams. About one and a half gallons of oil are in circulation, and this passes through two filters. It has been found that no oil cooler is necessary. Hardened liners of the wet type are used.

The bearer arms are separate castings bolted in position. For this reason no difficulty is presented in arranging for bearers which deviate from standard, a state of affairs which is frequently demanded when replacing one marine engine with another make.

Water circulation is maintained by a plunger-type pump operated from an eccentric on the forward end of the camshaft and therefore running at half engine speed.

An A.C. filter is fitted to the air intake and in practice this has proved a useful fitting not only because of the way in which dirt is removed from the air, but on account of the fact that it is reasonably effective in preventing water, which may accidentally fall upon the engine, from entering the cylinders.

Starting by hand is a simple operation. The free wheel has no springs and is fitted with large pawls which, by reason of their weight, are out of action when the engine is running.

Two-unit electric starting equipment is provided as an extra; this also applies to the reducing gear supplied in a ratio of either 2 or 1 or 2 3/4 to 1.