Here’s a nice story… It’s dinner time. Dad rings on a ship’s bell to summon the kids to the dinner table, as had become his custom since collecting the bell as a souvenir of a war not long over. Many years later one of those kids, now retired and having time for such things, muses upon the name engraved into the brass of the bell which had played such an import role in his early life. Had the boat from which it came been destroyed in the war, or had she simply rotted away in some quiet backwater?

He types in the name “Ruda”, and is astonished to discover that she is not only alive, but very well indeed, and he straight away resolves to reunite the bell with the boat. 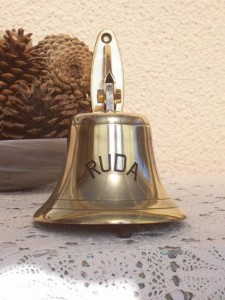 Thereby the crew of Ruda learned something of Ruda’s early war history thanks to Leading Engine Man Jimmy Green’s autograph book, and the recollections of his son. The bell has been carefully looked after by the Greens, and the blacked, engraved letters which spell the ship’s name look well against the polished brass.

When spring finally chased the snow from Ruda’s winter quarters in Finland, bell and boat were reunited and she reverberated with a sound not heard on board for seventy years.

Despite careful inspection of all the old photographs, no bell is visible but it is probable that it hung on the mast. A suitable place for it today might be the front of the wheelhouse, but an opening window there would necessitate the fabrication of a new mounting arm. Luckily for Ruda she can count a skilled metal-worker amongst her friends, so now her original bell hangs from a handsome bronze bracket where it looks (and sounds) quite splendid! 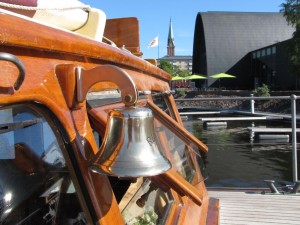 Our profound thanks are due both to Jimmy Green for his foresight in removing Ruda’s bell for safekeeping, and to his son for generously returning it to her. More about Jimmy’s and Ruda’s time together can be found on the ‘Ruda at war’ page.