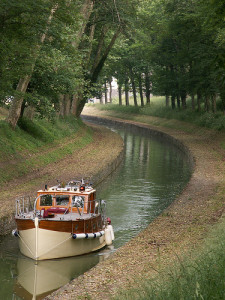 Here you will meet a likeable little ship that is known at Lloyd’s Register of Shipping as ‘Official Number 166177’, to her friends as ‘Ruda’, and to her devoted crew as entertainment, distraction, transportation and, best of all, home.

When she was launched at the end of the 1930’s it could have been said that Ruda was nothing remarkable. Indeed, she may even have looked a little old-fashioned when compared with the other hopefuls lined up along the banks of the River Thames for the 1938 London Boat Show. True, she was fitted with electric lighting and could boast a pair of the latest, high-speed diesel engines but everything else, from the rake of her straight stem to her stern, dark interior was decidedly unadventurous.

Perhaps after all it was the storm building over Europe that turned the thoughts of potential buyers away from messing about in boats, but whatever the reason Ruda returned home un-sold. For the next few years she played her part in defending our coastline – but what would become of her at the end of the war when this work was done and Britain was on the verge of a technology and design revolution?

If you want to discover a little more about Ruda, if you are interested to learn what became of her and if you want to know why we love her, this site is for you.